Artist Arkee Chaney spent 31 years creating compelling and poignant works of art from prison. Now he is free and is sharing his visionary work with the world. 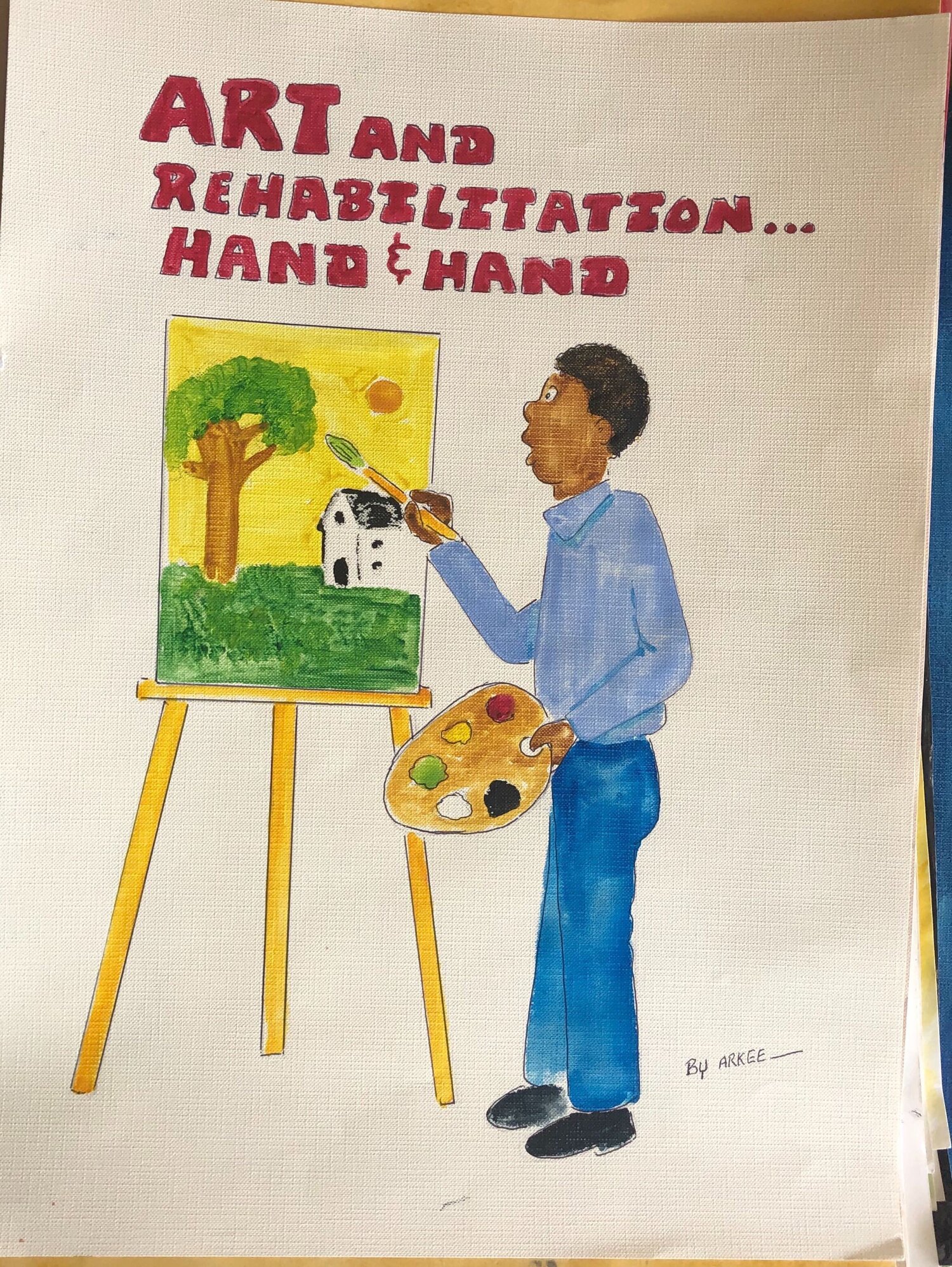 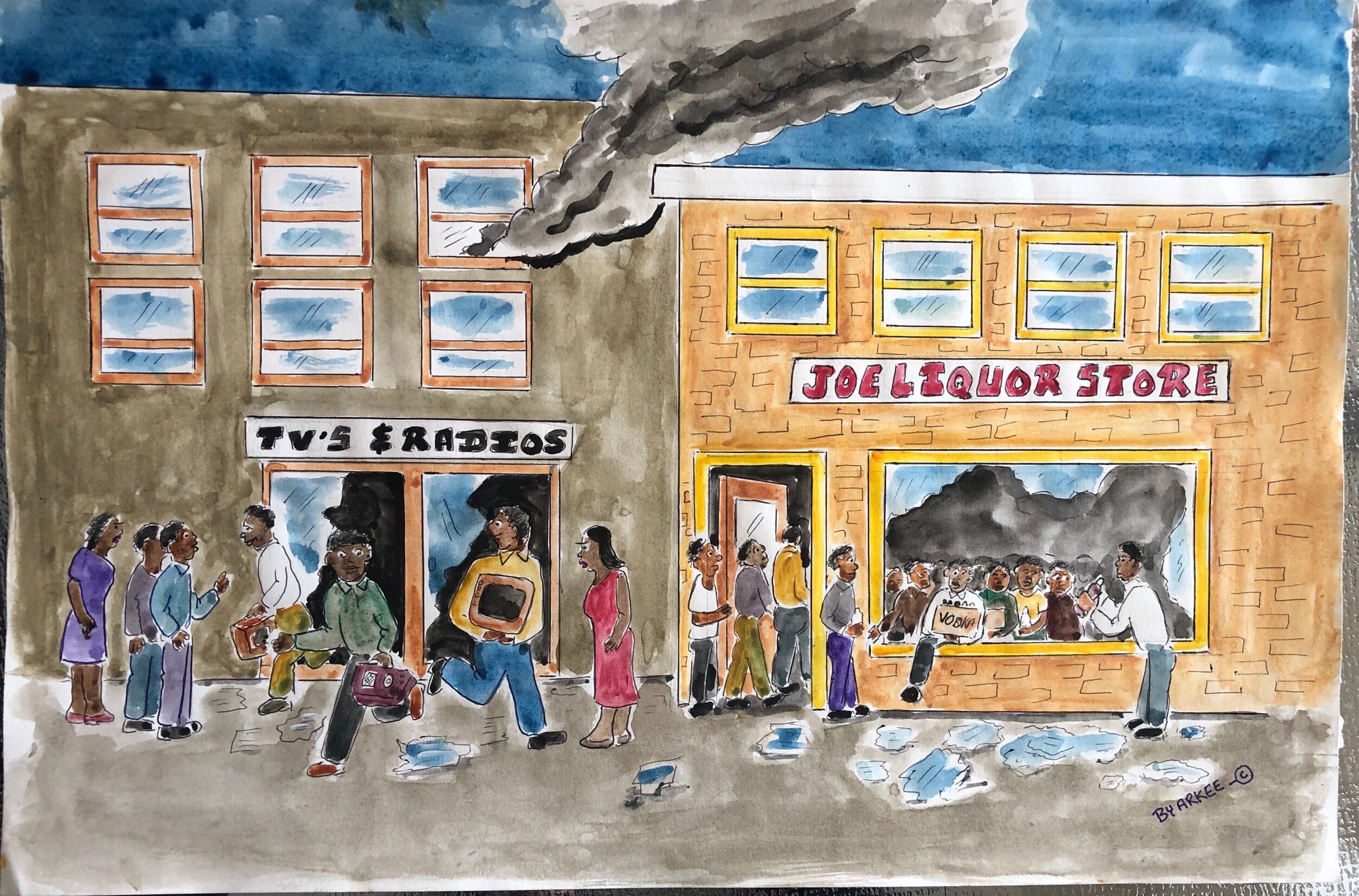 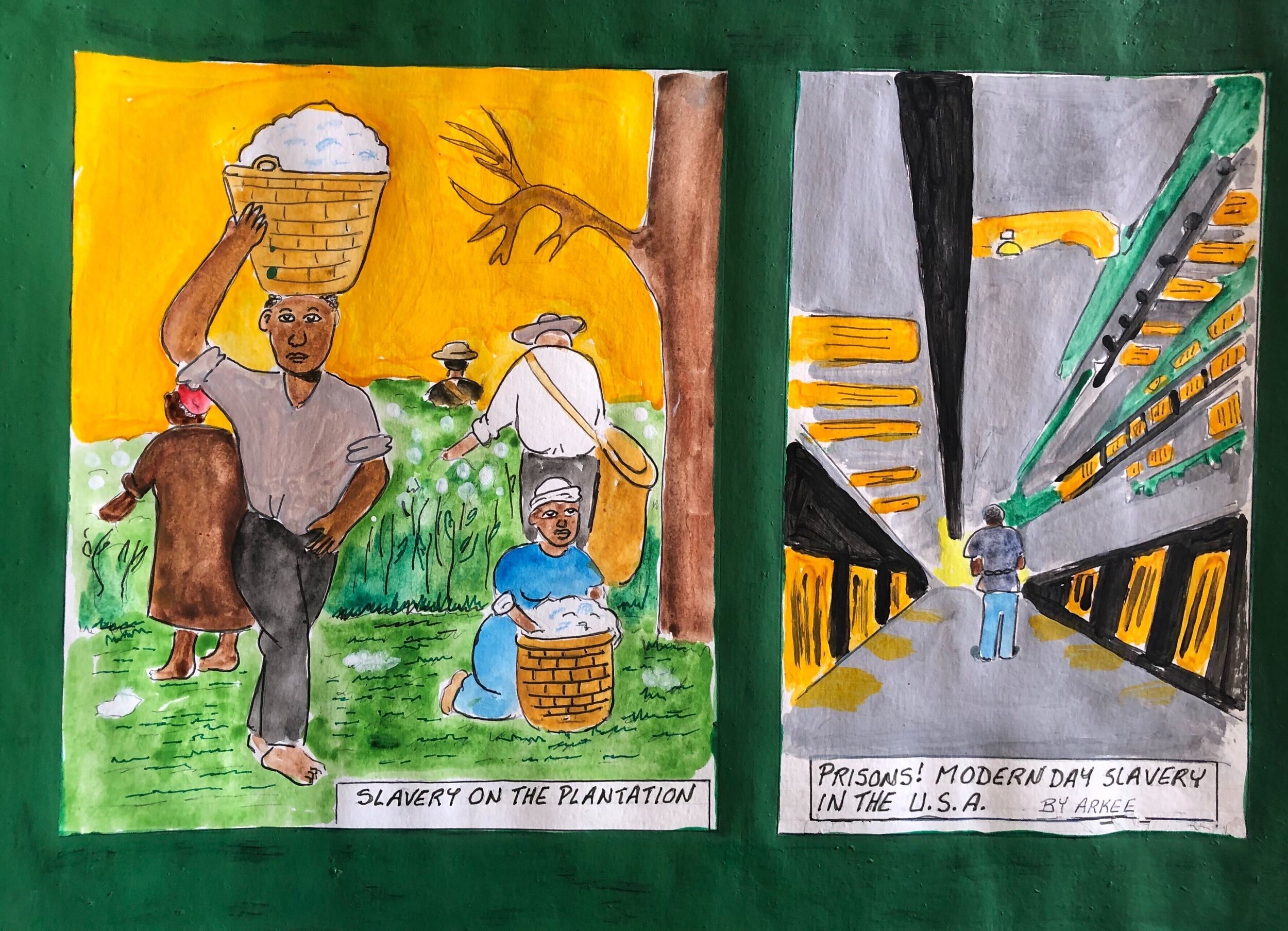 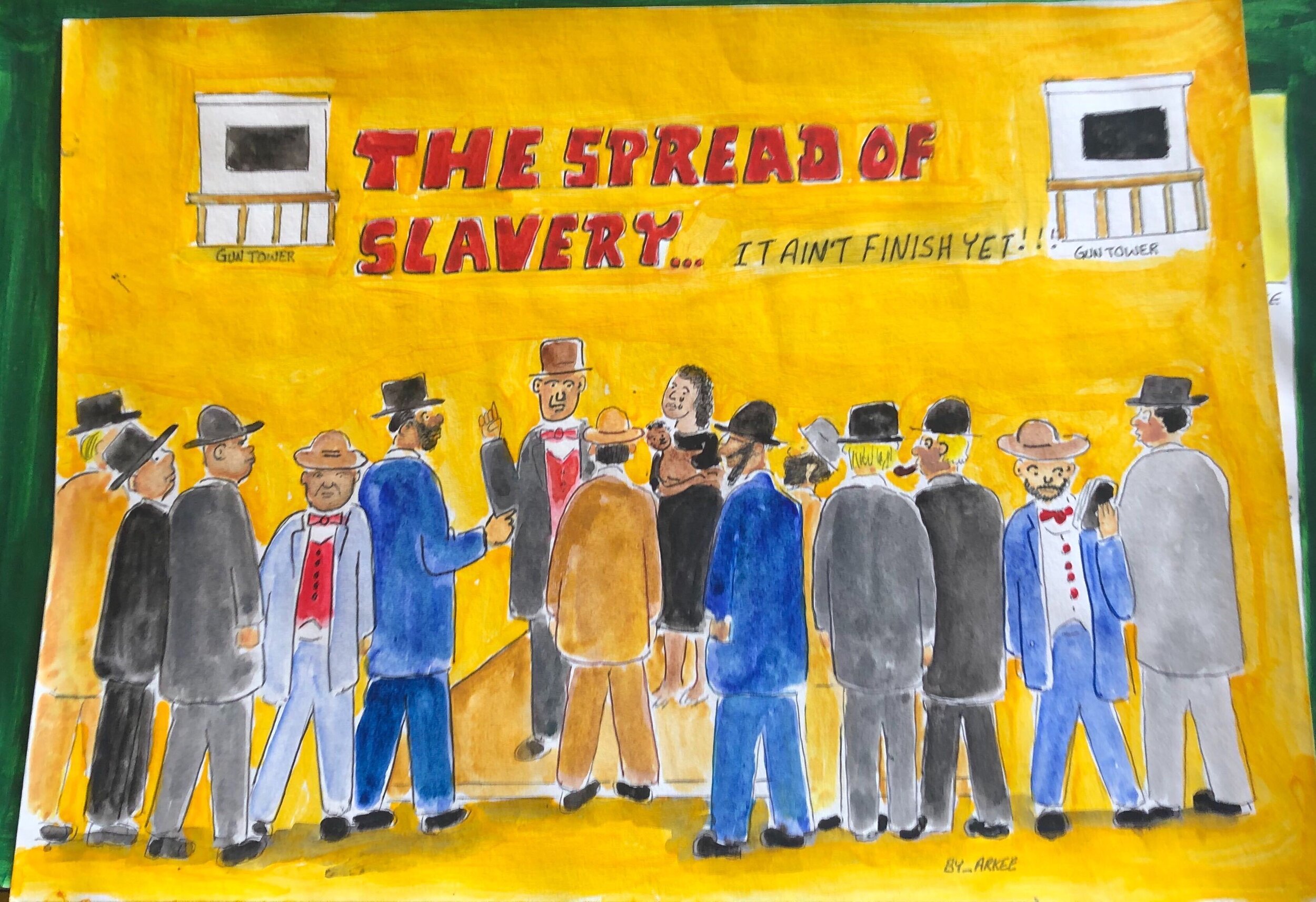 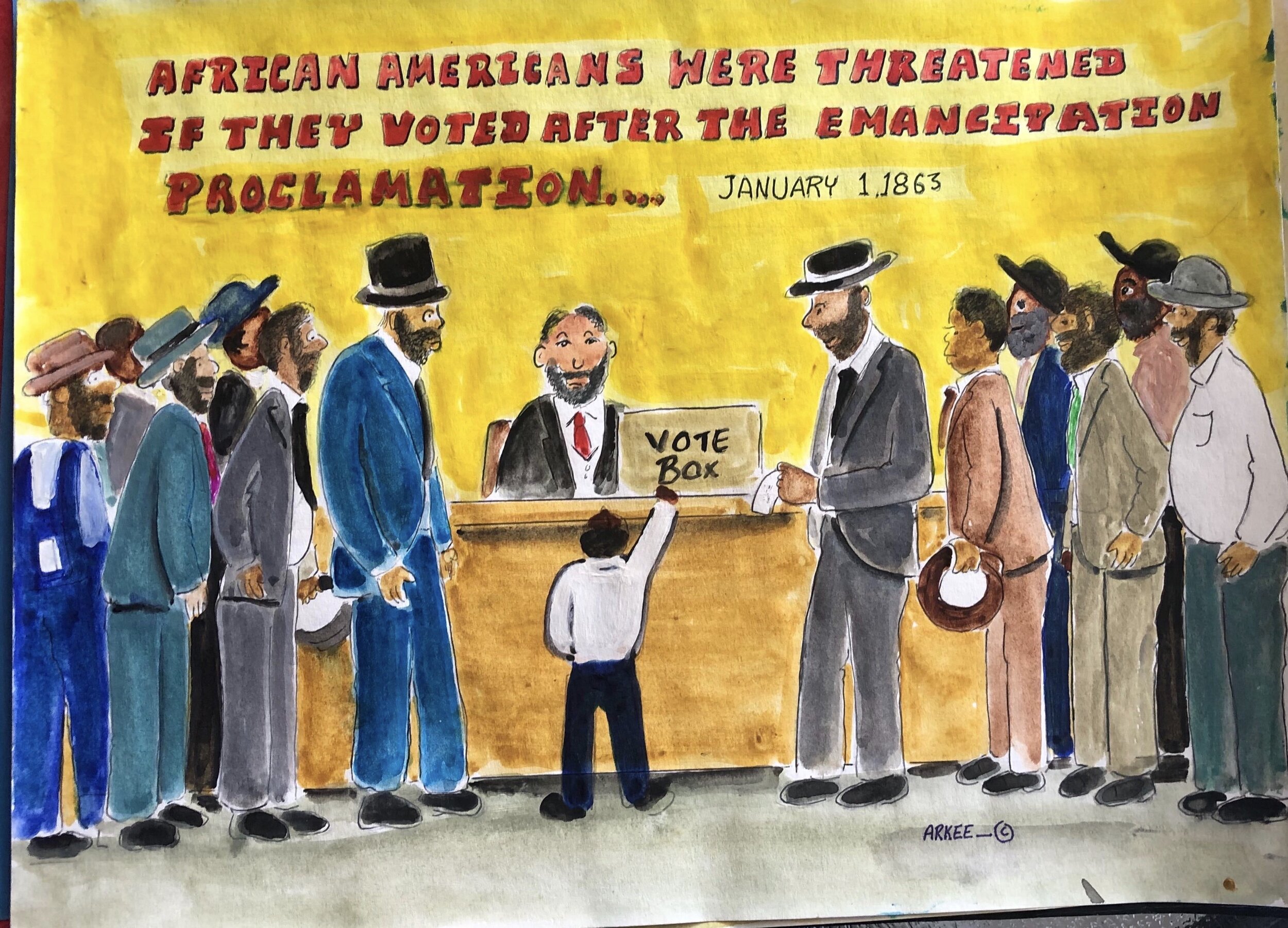 After spending the last 31 years behind bars for his third armed robbery conviction, Arkee Chaney walked out of Hill Correctional Center in Galesburg, IL a free man on Tuesday, June 23.

Chaney, 76, was sentenced to natural life in the late 1980s after he and another man robbed a cab driver at knifepoint on the Far South Side of Chicago.

It was Chaney’s third class X conviction according to Illinois’ punitive “three strikes” law, which allows prosecutors to seek mandatory life sentences allowing judges no other choice than to send people away for life—Arkee was sentenced to life in prison.

Thanks to Wendy Bloom and Daniel Carlomany at Kirkland & Ellis LLP along with the Illinois Prison Project who tirelessly fought for his renewed freedom, Chaney’s sentence was commuted to time-served by Gov. J.B. Pritzker.

While incarcerated, Chaney’s interest turned to art — something he was unable to pursue before his conviction. He said, “his life would have been different if he had been able to pursue art earlier.”

Chaney stopped attending school at a young age and got caught up with the wrong crowd. He was often teased because of his name—originally named after his father Mable—which caused a lot of fights between him and the other students. “Those were the worst years of my young life,” he said. Arkee hated school but loved the attention he would get from his drawings. “I would be asked to stay after school around the holidays to draw decorations for the hallways, classrooms, and windows,” he said.

Chaney said, “I always loved art, but I didn’t always know how to do art.” He began tracing cartoon caricatures from the funny papers when he was seven years old. “I was never serious about my art, but after doing it for so long I became good at it.”

His mother bought him a drawing book and a box of coloring pencils during his teenage years after noticing his creative potential. “Those supplies must have cost her about twenty dollars all together, but I was in seventh heaven,” he said.

As time passed by, so did Chaney’s interest in art. “I don’t recall when or how it happened, but as the years passed by, I stopped drawing,” he said. He would rediscover his passion for art while serving time in the Illinois Department of Corrections (IDOC).

In the 1980s while serving time at Graham Correctional Center, Chaney got a job working as a cartoonist for the prison newspaper. “Years had passed since I’d drawn cartoons, or anything for that matter, but it came back to me quite easy,” he said. Chaney said he is never short of ideas for cartoons, paintings, or poems. “My best work comes naturally, I don’t force anything,” he said.

From Graham, he was transferred to East Moline Correctional Center where he was first introduced to ceramics. “I didn’t know what the word ceramic meant before I got there,” said Chaney. His first impression of the ceramics room after seeing everyone in there working was much different from how he feels today. “I thought they were a bunch of suckers who needed to get a life,” he said. He couldn’t understand why someone would sit for hours doing that type of work.

“Ronny introduced me to ceramics and taught me the fundamentals of glazing,” said Chaney. Ronny, who ran the ceramics room, was familiar with Chaney’s work as a cartoonist and thought he might take a liking to ceramics. “I fell in love with ceramics and after three or four months I was one of the best, if not the best, glazer at East Moline,” he said.

Chaney said ceramics aren't as complicated as it sounds because all of the pieces are created using molds. “All you need is a steady hand, an eye for detail, and color coordination,” he said. Chaney took great pride in his work. He said, “Looking back, I can’t understand how I ever allowed ceramics to get away from me.” Chaney said he would’ve made a career out of ceramics if given the chance.

In 1987, while serving time in Stateville Correctional Center, he participated in an arts program under the direction of Dr. Margaret Burroughs. Dr. Burroughs—the founder of the DuSable Museum of African American History in Washington Park—taught art at the facility once a week.

Dr. Burroughs helped cultivate the artist in Chaney. His first medium was ceramics, but under the teachings of Dr. Burroughs he added painting to the list. As time went on, she would bring him art supplies and encourage him to experiment with different types of paint.

Thanks to her support and faith in him, Chaney’s work has been displayed in museums and traveled to Africa and Cuba. “Dr. Burroughs played a major role in my development as a creator,” he said. Chaney said whenever he had doubts about his abilities as an artist, she would tell him, “Yes you can. Just do it.”

Many of his pieces pay homage to African tribal art and provide social commentary on topics such as slavery, poverty, and the African American dilemma.

Chaney soon began creating comics for “Stateville Speaks”—a prison newsletter that is produced for and in part, by Illinois prisoners. The quarterly publication was started by Renaldo Hudson—a former death row inmate—and prison reform advocate Bill Ryan to provide a creative outlet for those incarcerated.

Art served as an anchor for Arkee while he was incarcerated. “Anytime anyone was looking for me all you had to do was look in my cell or the art room,” he said. Before taking up art, Chaney said he would sit in his cell and watch fellow inmates walk by in search of drugs and alcohol. “I couldn’t allow myself to go out like that, there had to be something more for me to do,” he said

Chaney has been creating nonstop since his release in June after his life sentence was commuted by Gov. J.B. Pritzker.

With the help of his friend and mentor Bill Ryan, Arkee has converted their basement into a home studio.“I use one room for ceramics and the other for painting,” he said. Chaney is more focused on ceramics these days, but still finds time to paint.

Arkee Studios represents a formerly incarcerated man who— after spending 33 consecutive years in prison—has the opportunity to pursue his life-long dream of being an artist.

When I spoke with Arkee he said the message behind his art has not changed. He is still committed to telling his story and the stories of others like him. “I still have friends in prison who need help and support, so it would be messed up for me to stop caring now that I’m out,” he said.

He is currently working on a series of Donald Trump Tiki’s. Politics, Religion, and the African American experience remain a constant theme throughout his artwork. “Due to the nature of my art a lot of people might not like it, but that’s their problem not mine,” he said. Arkee continues to use his art to bring awareness to issues of racism, poverty, and other social injustices. “As a creator, I’m only a small piece of a larger picture,” said Chaney.